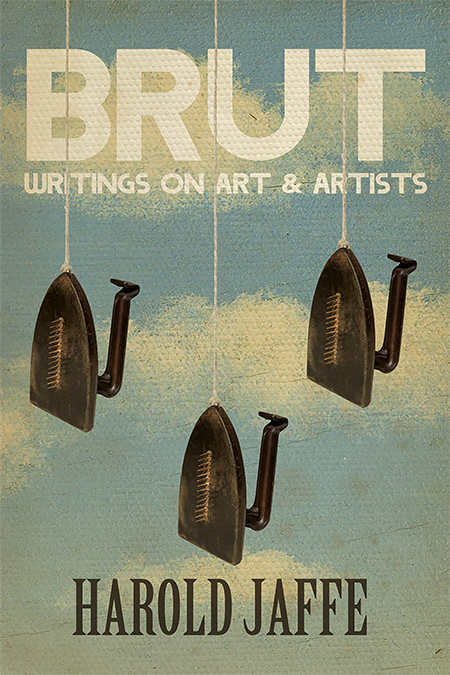 Harold Jaffe is well-known for his docufiction, which is at once personal and detached, serious and satirical, familiar and esoteric. He has been recognized for pinpointing and even aestheticizing the media pathology that informs and increasingly determines our daily lives. In BRUT, Jaffe addresses an extraordinary range of films, writers, painters, philosophers, and “outsider” artists, each with the brevity, clarity, and dramatic understatement that typify his prose. Nina Simone, Marlon Brando, Albert Camus, the Black Panthers, Angela Davis, Jean Genet, Sylvia Plath, Clarice Lispector, Dick Gregory, James Baldwin, Simone de Beauvoir, Mark Rothko, Alberto Giacometti, William Blake, Greta Thunberg, Frantz Fanon, Antonin Artaud, Man Ray, Dada, Che Guevara, John Coltrane, Pasolini … in every instance, it is not just the mind of the artist, but the heart-mind, the felt passion, that Jaffe teases out of his subject with uncanny nuance.

HAROLD JAFFE is the author of numerous volumes of fiction, novels, docufiction, and essays. His books have been translated into 15 languages and he has received many accolades, among them two NEA grants, two Fulbright fellowships, and three Pushcart Prizes. Jaffe teaches literature at San Diego State University and is editor-in-chief of Fiction International.

"Equally sweeping and intricate, Harold Jaffe’s BRUT lays bare writers and artists, their creations and obsessions, their conflations and flagellations of self. But instead of treading the well-worn paths of 'art as politics' or 'life as art,' Jaffe blows up all possible paths. So glad it's coming out in the world-anti-world soon. BRUT is a timely and true gem." —NEW ORLEANS REVIEW

"Harold Jaffe’s BRUT could not be timelier. The book broadcasts the vision of a master conjurer—a writer who sees through walls, who dismantles both assumed truths and false truths, who celebrates the dialectic of creation and destruction that is the authentic act of imagination. Jaffe’s selection of artists is impeccable; his brief biographical vignettes are not just illuminating, but revolutionary." —LARRY FONDATION

"Jaffe makes interesting connections between lives and across disciplines while illuminating some of the darker corners of art history. More importantly, he urges artists and those who care about art to take social expectations and conventions and weave them into a welcome mat. He exhorts artists to acts of greater creativity, freedom, and defiance. I can imagine a novelist, in the midst of being lectured about what’s trending at publishing houses, punching out his agent while Jaffe smiles with approval." —THE ARTS FUSE

"Jaffe reads like an angel with horns. A shamanic recorder of brut(al) times, with hope to keep us turning the page and fire to activate our strongest selves. I love him, this book, these writings." —STEPHEN D. GUTIERREZ