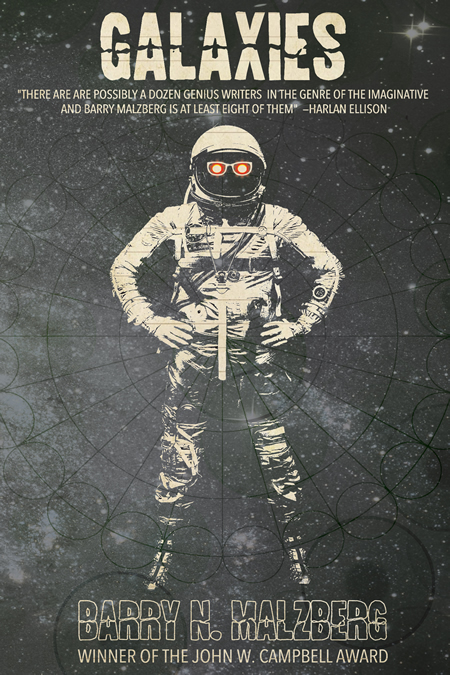 There is a spectre haunting the science fiction genre—the spectre of Barry N. Malzberg.

In a genre that, with one hand, claimed to be the ultimate storehouse of innovation, and with the other, leveled strict rules for writing and codes of narrative conduct onto its authors, Malzberg stuck out like a forked tongue, composing works of bona fide literature that dwarfed the efforts of his contemporaries and established him as one of science fiction’s most dynamic enfant terribles.

Originally published in 1975, Galaxies is a masterwork of the Malzberg canon, which includes over fifty novels and collections. Metafictional, absurdist and sardonic, the book mounts a concerted attack against the market forces that prescribed SF of the 1970s and continue to prescribe it today. At the same time, the book tells a story of technology and cyborgs, of bureaucracy and tachyons, of love and hate and sadness . . .

Despite his deviant literary antics, Malzberg could not be ignored by the SF community, winning the first annual John W. Campbell Memorial Award and receiving nominations for numerous other accolades in the genre. Nonetheless his writing has not received the attention it so profoundly deserves.

Galaxies is among the works listed in acclaimed SF editor David Pringle’s Science Fiction: The 100 Best Novels, published in 1985. With an introduction by Jack Dann, this special anti-oedipal paperback edition ushers Malzberg’s genius into the twenty-first century.