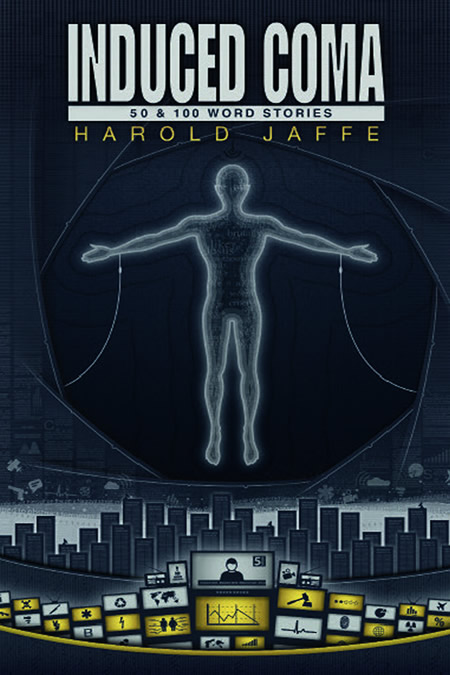 A semi-sequel to the visionary Anti-Twitter, Induced Coma once again features Harold Jaffe writing to the Nth power, taking as his subject no less than the benighted globe. Including published mainstream narratives and “news” articles from the US and abroad, the collection covers an extraordinary range of subjects—activist art, global warming, revolution, the entertainment industry, and the freakishly banal happenings of our day-to-day lives—all of which the author deconstructs to expose their ideological subtexts in uncanny ways. Satirical, critical, tragic and ruminative, Jaffe works every register masterfully. Induced Coma is a singular tour de force composed by one of the most innovative writers of our generation.

HAROLD JAFFE is the author of numerous volumes of fiction, novels, docufiction, and essays. His books have been translated into 15 languages and he has received many accolades, among them two NEA grants, two Fulbright fellowships, and three Pushcart Prizes. Jaffe teaches literature at San Diego State University and is editor-in-chief of Fiction International.

"Jaffe has steadfastly continued to write fiction that is formally and conceptually adventurous while at the same time advancing a radical sociopolitical critique that portrays US culture in the most starkly unfavorable light. These stories challenge literary convention, but this is done less in the name of redirecting or refreshing literary practices than of calling attention to the cultural and political depredations of the world we live in, forcing our awareness that they are depredations, so that, presumably, we might do something about them." —KENYON REVIEW

"Because of his ability to be simultaneously transparent and dreamlike or mystifying, one cannot escape the inclination to place Jaffe alongside Borges—or, in his more 'terroristic' criticisms, Foucault. Ultimately, Jaffe’s newest collection upholds his reputation as a master of literary activism, not terrorism: he does not disappoint readers seeking the ideological truths belying a diseased surface culture." —CHICAGO REVIEW

"A wonderfully prismatic insight into the current mania of our society, Induced Coma simultaneously offers a comment on the reductivism of Twitter culture—and exponentiates the form to a level of psycho-philosophical prose poetry, with infinite nuances and ironies." —R. SEBASTIAN BENNETT

"Harold Jaffe’s Induced Coma makes ‘news of the weird’ not only not-weird but also not-news. In other words, Jaffe has brilliantly turned all our news into weird news." —MARK YAKICH

"Upending the notion of ‘flash’ by installing a cryptic directness that tells of our times unflinchingly, without artistic fluff or emotional posturing, Jaffe has continued his venturesome break with tradition in Induced Coma. They’re not sleepers; these miniature anti-fictions give maximum pleasure. They also create unease and awareness. Absorb them." —STEPHEN D. GUTIERREZ