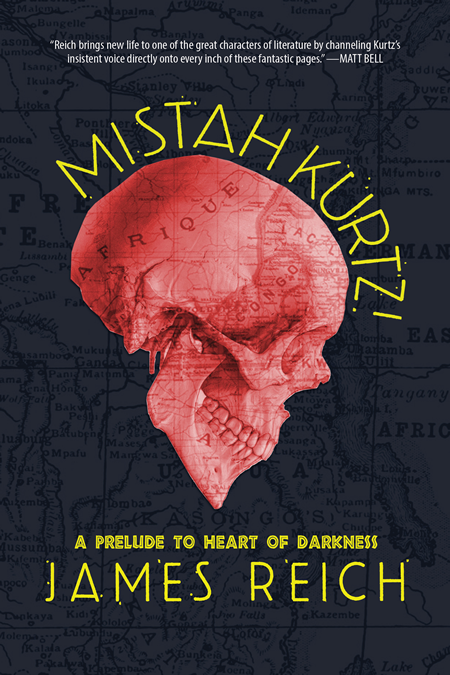 In Mistah Kurtz! A Prelude to Heart of Darkness, James Reich discloses the contents of the papers that Kurtz entrusts to Marlow and the end of Joseph Conrad’s canonical novella. Drawing on clues left in Conrad’s account, the novel anticipates and dovetails with the arrival of Marlow at Kurtz’s ivory station in the Congo. Giving voice to one of the most enigmatic characters in the literary canon, Reich presents meticulous and controversial solutions to the origins, mystery and messianic deterioration of Mistah Kurtz: company man, elephant man, poet, feral god. Appalling rivalries, murder, fragile loyalties, doubt and desire shroud the pages of this book—part adventure, part desperate confession. Filtering the strangeness of Apocalypse Now! and historical accounts of the ivory trade, this irreverent, audacious endeavor lends meat and madness to the ghosts of the Congo, names that which had been nameless, and renders this Season in Hell in crystalline clarity.

JAMES REICH is the author of several novels, among them The Song My Enemies Sing, Soft Invasions, Bombshell, and I, Judas. A regular contributor to The Rumpus and Fiction Advocate, he has published fiction and nonfiction in Salon.com, International Times, The Nervous Breakdown, Sensitive Skin, Sleeping Fish, and others. Reich is the editor-in-chief of Stalking Horse Press as well as a founding member of the band Venus Bogardus with vinyl and CD releases on independent record labels in the US and UK.

"This book is beyond marvelous." —FULL STOP

"In Heart of Darkness, Marlow tells us that Kurtz's voice 'rang to the very last,' hiding 'in the magnificent folds of eloquence the barren darkness of his heart.' In Mistah Kurtz!, James Reich turns back the clock to give that eloquence fresh room, bringing to new life one of the great characters of literature by channeling Kurtz's insistent voice directly onto every inch of these fantastic pages." —MATT BELL

"Mistah Kurtz! is not only satisfying because it reintroduces us to an adored classic but because it takes us so convincingly someplace new. The deceit, longing and mosquitos are so thick you’ll grip your chair and slap at your ankles." —RAMONA AUSUBEL

"Mistah Kurtz! is a critical intervention, an appraisal and an amplification, a wonderful remaking of Conrad's Heart of Darkness. The unspeakable is spoken." —PIPPA TANDY