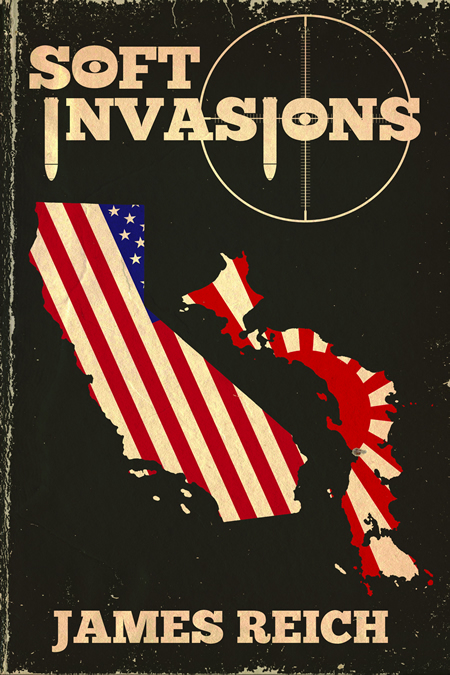 Los Angeles, 1942. Psychoanalyst Maxwell McKinney and his wife Joan await the return of their son after the sinking of the USS Yorktown. With sections of the city under camouflage and ordinances against “enemy aliens,” McKinney is troubled by his ambivalent feelings for his son and fears that California will be invaded by the Japanese. A chance encounter with a man who appears to be his double, a screenwriter named Sid Starr, allows McKinney to confront his guilt. Entwined with McKinney, Starr finds that his own identity is at stake, and between the two, McKinney’s wife and son fight against their own destruction.

Punctuating great American fears, James Reich targets the zones of recent history where worlds and anxieties collide, among them UFOs, the Battle of Midway, Hollywood, psychoanalysis and Japanese internment. Soft Invasions is an existential thriller about cowardice, cruelty and betrayal that invokes David Cronenberg's body-horror classics as well as the cold California glamor of Joan Didion, the ominous noir of Horace McCoy and the psychic angst of Norman Mailer.

JAMES REICH is the author of several novels, among them Soft Invasions, Soft Invasions, Bombshell, and I, Judas. A regular contributor to The Rumpus and Fiction Advocate, he has published fiction and nonfiction in Salon.com, International Times, The Nervous Breakdown, Sensitive Skin, Sleeping Fish, and others. Reich is the editor-in-chief of Stalking Horse Press as well as a founding member of the band Venus Bogardus with vinyl and CD releases on independent record labels in the US and UK.

"In his exceptionally well-written novel, Soft Invasions, at times lyrical, elegiac, and even mystical, James Reich asks some profound questions about time and identity. This fast-paced book is a meditation on history and human relationships which will keep you thinking and reading to the last page." —MICHAEL MOORCOCK

"The queering of the Oedipus complex in Soft Invasions lifts it into a total psychology." —LAURENCE A. RICKELS

"Reich is a formidable writer. He brings his characters and events to life with cinematic clarity. His eye for detail makes even the familiar seem alien. Above all he gives form to the terrifying invisible nuclear air that envelopes us all." —MALCOLM MCNEILL

"Like Cormac McCarthy wandering a William Burroughs wasteland while blasting a riot grrrl mixtape on a scavenged Walkman!" —S.A. CRARY

"Defiant, toothsome, and flaming with color, the voice of James Reich is one of the most exciting to emerge in recent years; he is both something new and something wholly real. If it is possible for a true underground writer to exist anymore, he is that author." —STEPHEN E. ANDREWS