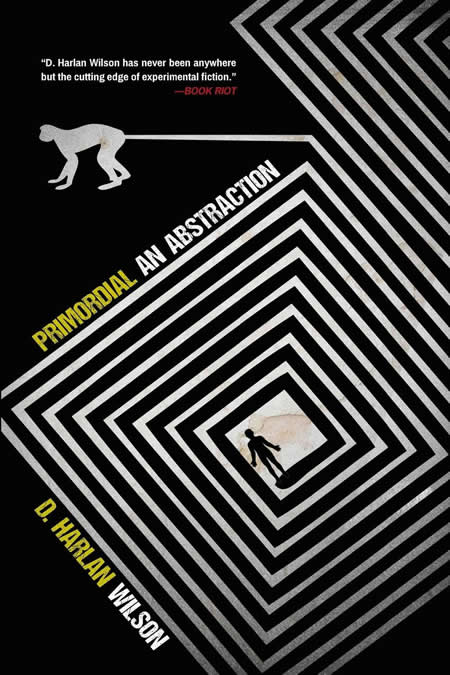 A nameless professor’s methods of teaching and scholarship become toxic; he is sent back to college to redo his Ph.D. and redeem his authority. This is only the beginning of terror. Life at the university isn’t what it used to be. Confronted by idiocy, redundancy and pornogrpahy at every turn, the professor must struggle to follow the rules and be a good student even as he terrorizes the roommates, faculty, staff and administrators that threaten to undermine his rancorous will to power.

Narrated in D. Harlan Wilson’s signature “Hörnblower prose,” Primordial: An Abstraction is an exercise in contemporary idiocy that rakes academia over the coals while plumbing the uncanny obscurities of existence and identity.

"D. Harlan Wilson has never been anywhere but the cutting edge of experimental fiction." —BOOK RIOT

"Primordial is the terse, angular coup de grace that The Campus Novel has been pleading for: a hilarious gonzo screed against the mediocre effacements of academia, a Monty Python riot broken by violent outbursts of common sense." —JAMES REICH, author of Bombshell and I, Judas

"D. Harlan Wilson is one of those rare voices in contemporary fiction that deserves to be called incomparable. He understands strange, intelligent fiction and stands in the middle of it, pushing out in all directions like a rhizomatic monster that demands new space . . . Primordial is fast, sharp, and weird, and that combination is what Wilson consistently delivers like no other author out there." —VOL. 1 BROOKLYN

"Primordial: An Abstraction is, in some ways, a Kafkaesque jab at bureaucracy where the acquisition of knowledge, even trivia, becomes the narrator’s castle. The book is funny, with dialogue veering into Marx Brothers, Monty Python, and Donald Barthelme-esque territory—but devoid of puns or other cheap humor. It’s farcical but not whimsical or—the dread of all dreads—zany. It’s funny the way Hunter S. Thompson was funny: vicious, cruel, aggressive. But Primordial possess the spirit of farce absent from the works of a writer like Thompson." —POP MATTERS

"D. Harlan Wilson's strange, hallicinatory, violent Primordial is not only perhaps the most disturbing novel set on university grounds ever to be published, but is also the world's first Bizarro campus novel . . . Wilson's vision presents the campus as Mad Max-like, post-apocalyptic wasteland—a landscape the narrator runs amok through, his rampage of violence reflecting a Grand Theft Auto-type video game more than any sort of reality-based world . . . There are times where the novel's wild experimentation with form and content, as well as its metaphorical use of arcane academia and institutionalized knowledge, bring to mind a writer like Jorge Luis Borges. But the Bizarro plot compressions and Gonzo acid flashbacks place Wilson in a much more dangerous, nihilistic landscape than anything found in Borges . . . The möbius strip-like circularity of graduate-level academia fits many of the definitions of the Ponzi scheme, and Wilson seems to be arguing that the extinction of this culture is necessary for us to 'reboot' and 'revert' back into a 'natural primitive state' where meaningful connection would be possible once more." —DENVER QUARTERLY

"And so it is that the reader is led through the kaleidoscope of harm—pornography, random violence, death, tune in, drop out, swallow this before this swallows you. Does it all read as randomly connected mind droppings? Oh hell yeah. Is it that? Oh hell no. I have a protective interest in revealing the totality of an author's work, so I shall not delve further into Wilson's personal hallucinogens wrought on paper, other than to say we've been there, and we'd prefer to think we hadn't done that. Read this book. It's not your father's Oldgrishamobile." —SAN FRANCISCO BOOK REVIEW

"The narrative moves at a ripping pace. Wilson's illustrates the de-evolution of academia with a Kafkaesque edge in Primordial: An Abstraction. It's the same basic premise of NBC's 'Community,' but this version of a return to college is less sitcom and more a cynical nightmare." —THE SMALL PRESS REVIEW

"This is one of those rare novels you can treat like a poetry book and take off the shelf for a random dip when you need your complacency stirred. Completely recommended for all aficionados of the bizarro genre or if you are willing to have your brain tickled." —SCIENCE 42 FICTION

"Making fun of academia is great, and this is the novel I’d been waiting for because it does exactly that, but with enough intelligence that any reply is impossible. D. Harlan Wilson is one of the wittiest writers working today, and this one is as personal and smart as it is wild and funny." —VERBICIDE MAGAZINE

"D. Harlan Wilson is an amazing (and very funny) writer. One never knows what to expect. Primordial is filled with unexpected pleasures." —DEREK PELL, author of Assassination Rhapsody and The Little Red Book of Adobe LiveMotion