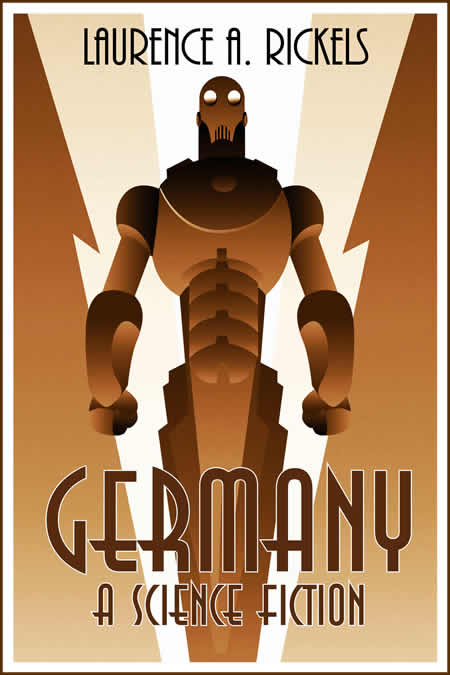 In I Think I Am: Philip K. Dick, Laurence A. Rickels investigated the renowned science fiction author’s collected work by way of its relationship to the concept and condition of schizophrenia. In Germany: A Science Fiction, he focuses on psychopathy as the undeclared diagnosis implied in flunking the empathy test. The switch from psychosis to psychopathy as an organizing limit opens the prospect of a genealogy of the Cold War era, which Rickels begins by examining Dick’s The Simulacra and follows out with readings of Simulacron 3, Fahrenheit 451, The Day of the Triffids, This Island Earth and Gravity’s Rainbow, among many other genealogical stations.

Nazi Germany hosted the first season of the realization of science fantasy with the rocket at the top of this arc. After World War II, the genre had to delete the recent past and start again within the new Cold War opposition. Certainly the ancestral prehistory was still intact (in the works of, for instance, Jules Verne and H. G. Wells). At the bulk rate of its generic line of production, however, science fiction would thereafter become a native to the Cold War habitat.

This study addresses the syndications of the missing era in the science fiction mainstream, the phantasmagoria of its returns, and the extent of the integration of all the above since some point in the 1980s. Rickels works through the preliminaries of repair that must be met in a world devastated by psychopathic violence before mourning can even be a need. While I Think I Am was the endopsychic allegory of Dick’s corpus, Germany takes that corpus as a point of context for the endopsychic genealogy of the post-WWII containment and integration of psychopathy.

"Germany is not necessarily a work of consolation so much as it experimentally aims to establish ways of thinking about the preliminaries of repair. Rickels formulates a methodology that constitutes and is constituted by a paradox of absence and loss. A galvanizing critique, Germany is haunted by trajectories of doppelgängers that comprise 'the continuity shot of German science fiction'—from vampires and robots to the V-2 rocket, from Romanticism to Modernity, from Germany to California." —EXTRAPOLATION

"Germany: A Science Fiction is based on the idea that Nazi Germany was 'the first realized science fiction' and that all of the major themes in postwar sf—space travel, time travel, dystopias, alternate histories, etc. reflect the psychopathology of Nazism. In other words, Rickels argues that the history of sf cannot be properly understood without taking into account its inherent yet (until now) overlooked Nazi component." —SCIENCE FICTION STUDIES

"It could be said that each of the fictions in Rickels’ treatment present an allegorizing logic meant to contain the disaster of the failure to mourn. In two senses: of the 'disaster' in and as the repeated failure of mourning, and of the disastrous real of mourning as failure, a constitutively impossible obstacle to mourning’s ownmost possibility. Rickels is as univocal as Freud in this regard: because death is, for the unconscious, an impossibility, it is always in the context of the encounter of mourning that this impossibility is repeatedly staged. Rickels' work continues to seek where it cannot help but find, to our uncanny bewilderment and edification, the catastrophe in our midst" —THEORY@BUFFALO

"Combining the psychoanalytic vocabulary of Jacques Lacan with the deconstructive methods of Jacques Derrida, Rickels arrives at a deconstruction of psychoanalysis not unlike the 'schizoanalysis' of Gilles Deleuze and Félix Guattari. At its best, Rickels’ prose is a vehicle of pithy brilliance, but his skill as a close reader is what makes Germany: A Science Fiction most compelling." —RAIN TAXI

"It is that literature of the purge that Rickels finds so complex and fascinating and that he works to explicate in this explosion of a book." —SFRA REVIEW