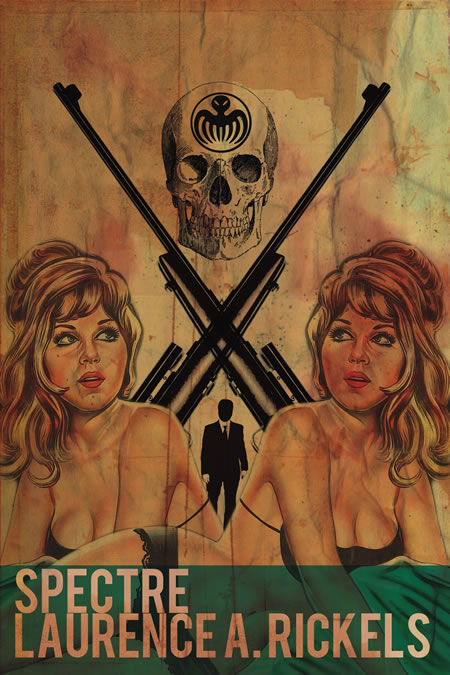 Ian Fleming whittled the effigy of James Bond out of his experiences with the British naval intelligence during World War II. After the publication of his first Bond novel, Casino Royale, in 1952, 007 quickly became a cultural icon in the Cold War and a fixture in our collective consciousness. In SPECTRE, Laurence A. Rickels examines Fleming’s novels and film adaptations like never before, looking awry at Bond through the sieve of psychoanalytic theory, history, and Kulturindustrie.

Within the Bond universe, SPECTRE (Special Executive for Counter-intelligence, Terrorism, Revenge and Extortion) is the global terrorist organization run by supervillain Ernst Stavro Bloefeld. Fleming added SPECTRE late in the game for the crossover into the film medium. The ghostly amalgam of perpetrators and victims of the Nazi era, SPECTRE deconstructs and manipulates the opposition of the Cold War in order to promote the welfare of an organization that is in every sense an underworld. For Rickels, SPECTRE is a theoretical apparatus whereby he monitors and measures the flows, intensities and codings of the Bond universe while using it to read other texts, ranging from the writings of Goethe, Shakespeare and Derrida to the post-Freudian theories of Melanie Klein. This visionary, richly allusive study breaks new ground while extending ideas developed in such works as Aberrations of Mourning and Nazi Psychoanalysis. Rickels’ approach is at once playful and pointed as he looms over Bond and lays him bare on the chaise.

"In the same vein as Dr. Laurence A. Rickels' brilliantly idiosyncratic I Think I Am exhuming the corpus of Philip K. Dick, SPECTRE propels Kulturindustrie theory into the 21st century with its pointed multi-layered, multi-disciplinary fun-e-really examination of the Bond nemesis via the shadow of its creator, Ian Fleming. The provocations of Rickels' genius combustion engine—Kulturindustrie, psychoanalysis, deconstruction, German idealism and Shakespeare—lures us into introjection from the mindless mass media projection Sensurround riding Bond's technological wave." —THE HUFFINGTON POST

"Laurence Rickels offers blazing illumination of the invisible undertow of disquiet and uncanny in our knowledge of culture, consciousness and technology." —JONATHAN LETHEM

"Rickels’ use of psychoanalysis makes it something like wallpaper on a computer, just the unquestioned background that provides a support for everything else to appear." —CRITICAL INQUIRY

"Just as Rickels couples with Blofeld, so he couples his postmodern riffs on psychoanalysis to SPECTRE. This brief new book can be read precisely as one of Blofeld’s moves against Bond: as Special Executive, Rickels gives us Counterintelligence, Terrorism, Revenge, and Extortion. Psychoanalysis is spectral." —THE RUMPUS

"In Rickels’s reading, psychosis, as a state of removal from reality, is tied to the integration brought about at the end of mourning, while in psychopathy, which involves more of a removal from society than from reality, 'the failure to empathize and mourn tests the limits of tolerance.' A resistance to mourning is important in that the subject becomes even more shaken than stirred." —LOS ANGELES REVIEW OF BOOKS

"Rickels lays out James Bond's milieu, the Cold War, as a burial site for the unprocessed losses of World Wars I and II. SPECTRE's wealth of evidence allows us to read the Bond stories, and those of SPECTRE in particular, in an increasingly broad register: first as Fleming's autobiography, then as an autobiography of the postwar era, and finally as an allegory for the childhood construction of object relations and their connection to fantasy, fear and death." —ARTFORUM